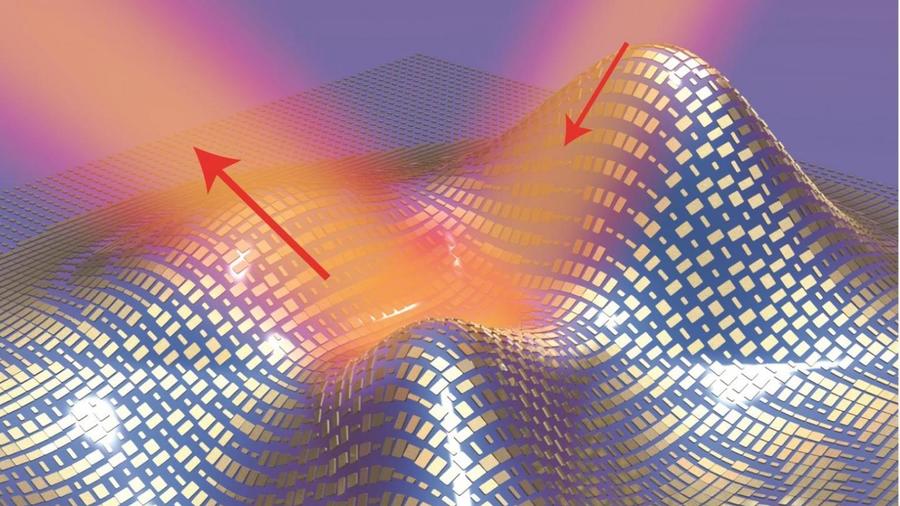 This illustration shows a 3-D skin cloak made from an ultrathin layer of gold blocks covering an irregularly shaped object. Light reflects off the cloak (red arrows) as if it were reflecting off a flat mirror. (UC Berkeley)

Have you always wished you had Harry’s super-cool invisibility cloak? I know I have. Would be real fun to have one, I always thought.

Now, scientists have created something that may very well pave the path for invisibility cloaks. For real, folks.

Researchers at the US Department of Energy’s Lawrence Berkeley National Laboratory and the UC Berkeley have created “an ultra-thin invisibility ‘skin’ cloak” that can be wrapped around a three-dimensional object to render it optically undetectable in certain wavelengths of light.

This cloak is tiny though, able to cover an object about 1,300 square microns. And the current cloak works only for a particular wavelength of light–730 nanometers. It would have to cover more wavelengths to be effective at a larger scale. But the device, described in the journal Science, offers a proof of concept that could, in the future, be potentially scalable to wrap around larger objects.

We see an 3D object’s curves, when light bounces off it and is scattered and the wavefront gets distorted. The new cloak is covered with nanoantennas made of tiny gold blocks of different sizes that counteracts the distortion of the wavefront, making it seem to an viewer that light is coming from a flat surface.

There have been previous attempts at invisibility. They have tried to redirect the light around the object they were hiding, which made the cloaks bulky and impractical. This cloak is just 80 nanometers thick, could one day be used in clothing,

Coauthor of the study, Xiang Zhang said, the technology could be used, theoretically, to also perform the opposite feat: turning a two-dimensional image into a three-dimensional one. It could even be used to make one object look like another, rather than to simply cloak it, he added.

Here’s what the doyen of science fiction had said way back when – “Any sufficiently advanced technology is indistinguishable from magic.”